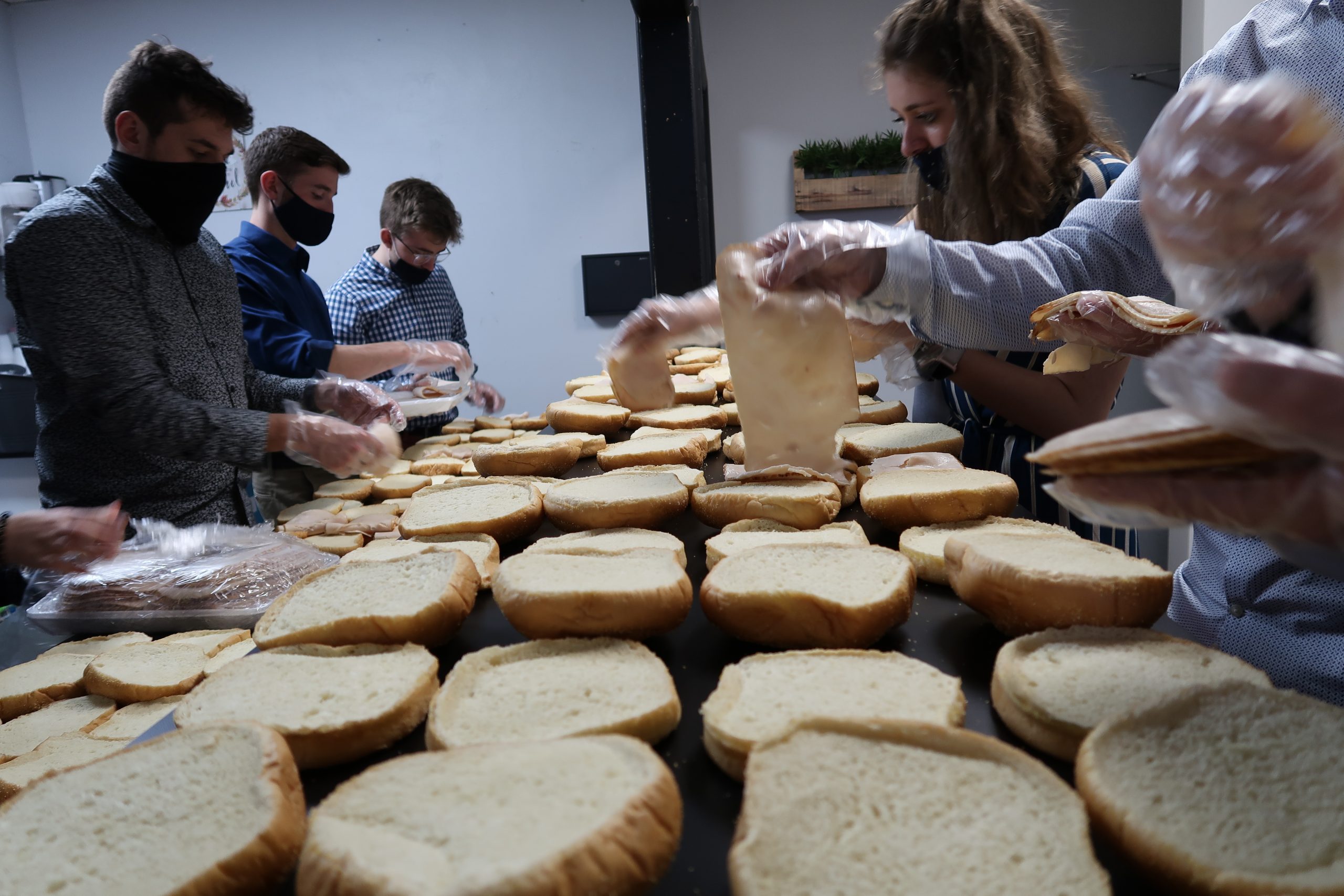 A few months ago, we let you know about two groups of Grove City College students who were making the choice to forgo typical spring break plans in favor of spending a week with a handful of local pastors and their congregations. You can read the story here.

Now that finals and the general end-of-semester craziness have passed, we wanted to circle back to each of the trips to find out how the students’ time with these pastors and their congregations shaped them and their views of rural ministry.

Serving in the PRM’s Agricultural Region

For co-leaders Tadd Perkins and Gavin Eberlin and the twelve other students who served churches from the PRM’s Agricultural Region, the trip started with a day of service with at St. John’s Episcopal church in Franklin, PA. Teaming up with Mother Elizabeth, the priest in charge, students lent a hand passing out food at the church’s monthly food pantry.

The service they offered that Saturday in late March extended beyond the bags of food the students helped pack and distribute. In addition to offering food that could nourish bodies, the students offered encouragement and prayers that could nourish hearts and souls. Emilee Henderson, a freshman biology major at GCC, describes the day as a “spiritually awakening experience.” “I was at a station where I was asking people if I could pray over them before they left. I had never prayed over anyone before, so it was really good for me to get that chance.”

In a testament to the interconnected nature of small-town churches and their communities, the group carried this posture of prayer beyond the church lawn to the larger community by ending the day with a prayer walk.

On Palm Sunday, the group worshipped with Pastor Bobbie Hunt and the folks at Irwin Presbyterian Church. The students served the congregation by harnessing the musical talents of a few in the group to lead the congregation in worship. After worship, the church hosted the students for a lunch and a moderated discussion about ministry in rural areas. Pastor Hunt notes that she and her congregation “were impressed with the students' insightful questions for us. It was encouraging to engage with these young people who will make a difference wherever and for whatever God calls them to.”

For the rest of the week the students split their time between Pastor Janet Pratt’s five-church Mercer County charge (Methodists United in Faith) and Pastor Deborah Ackley-Killian’s Heckathorn United Methodist Church in Venango County, PA. From painting and cleaning basement rooms, to planning and live-streaming Good Friday services, the group served with hearts and eyes open to what God was doing in the lives of these pastors and the communities in which they ministered.

For a second group of Grove City College students, participation in a PRM-ICO trip provided opportunities for service as well as a crash course in multi-cultural ministry and the region’s post-industrial history.

Led by Jake Santis and Bailey Henderson, the fourteen students who made up the PRM’s Rust Belt ICO team spent the week serving three churches in the PRMs Rust Belt Region. Each of the three churches was located in or near a town with a significant history of population loss and economic hardship.

At Pastor Charles Brown’s Rose Point Reformed Presbyterian Church, near New Castle, PA, the students jumped into projects ranging from light construction to the organization of a VBS program. They also enjoyed a meaningful time of prayer with Brown and the congregation.

According to Brown, "the students were wonderful," and their time with the congregation was refreshing. "They had a great attitude and seemed to truly love serving. It was exciting to see how the Lord is working in their lives. For me, the highlight of the week was the Wednesday night prayer meeting. Jake Santis offered a great devotional message, and we enjoyed a special evening of prayer together."

In addition to their time in New Castle, the group spent several days in Jeannette, PA—a town once defined by its booming glass industry. When the local glass industry shattered under the strain of a changing market, it left the shards of a broken economy and broken lives in its place. But the story of Jeannette, like the story of so many other post-industrial towns in the region, contains more than loss. As the GCC students on the trip soon learned, deep need has a way of igniting great vision.

The students found this vision in the examples of two PRM pastors serving in Jeannette—Pastor Dawn Sherwood, recently called to the pastorate of the historic First Presbyterian Church of Jeannette, and Pastor Nate Keisel, a church planter who founded Mosaic Community Church in Jeannette in 2017.

When Pastor Sherwood accepted a call to First Presbyterian in the fall of 2020, she brought a new pastoral presence to a congregation that had deep roots in the town. The students worshipped with Pastor Sherwood and her congregation on Sunday, had a meaningful conversation with her about ministry. Later they witnessed the promise and pain of the community firsthand as they joined her in a prayer walk in the neighborhood.

Pastor Keisel, whose prison to pastorate testimony we wrote about a few months ago, welcomed the team into a ministry brimming with innovation and a missional approach defined by attention to contextualization and the holistic impact of the Gospel. With Pastor Keisel at the lead, the group packed and distributed bags with food and crafts to neighborhood children and took part in cross-cultural and missional training sessions with Keisel and his team.

For GCC senior Janae Powell, the trip was an experience that proved deeply impactful, not just because of what the group did but also because of what they received. “We offered to serve the churches in any way we could, including maintaining a garden, painting hallways, tutoring children in the community, packaging care boxes, and any other miscellaneous tasks they needed help with. In return they served us as well with open arms and intense generosity, speaking truth into us and welcoming us into their church family.”

Ministry, like the Christian life, is centered around relationship—first with God and then with others. Sometimes, however, the “other” is distant or unknown enough that relationships never have the chance to form. Too often, that is the case with college students and the small and/or rural churches in the neighboring region. While these churches may long for interaction with college students, and may, as is often the case, have much to offer to and receive from these students, all too often no connection is made.

At the PRM, we hope to be a bridge connecting students with rural pastors and congregations for the mutual benefit of everyone involved. In the PRM's student-led, short-term mission trips, we’ve found an encouraging starting point in our effort to bridge this gulf, but there’s much more work to be done. We believe college students and rural churches are better together, and we look forward to facilitating more rural ministry connections in the months and years to come!

Charlie Cotherman is program director of the Project on Rural Ministry at Grove City College. He is also a pastor at Oil City Vineyard, a church he and his wife Aimee had the privilege of planting in 2016. He has written on rural ministry, church planting, and history for a variety of publications including Christianity Today, Evangelicals, and Radix. He is the author of To Think Christianly: A History of L'Abri, Regent College, and the Christian Study Center Movement and a contributing editor of Sent to Flourish: Guide to Planting and Multiplying Churches. He lives with his wife, four children, and a cat in Oil City, Pennsylvania.