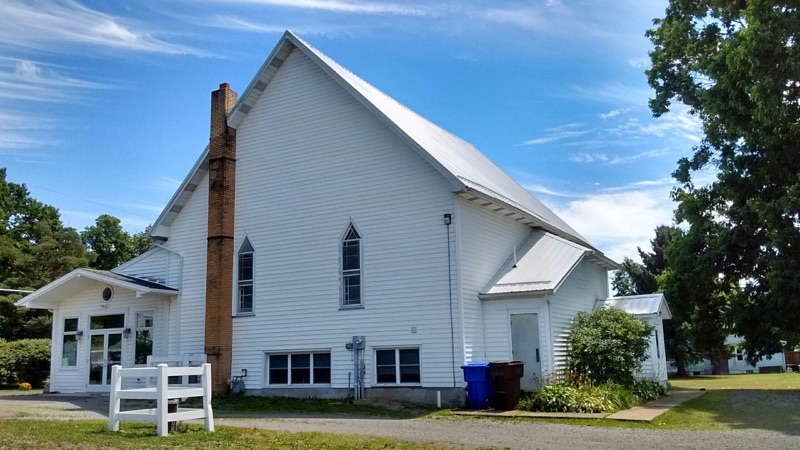 Leading A Five-Church Charge Through This Crisis: An Interview With Pastor Janet Pratt

For many of us, it is difficult enough to lead one congregation through the current COVID-19 crisis. For Janet Pratt, the task is even more complex. As the pastor of a rural five-church charge, she’s finding that the challenges—and the joys—are multiplied.  Here are some of the highlights from our recent interview.

Charlie Cotherman (CC): What were the initial days of the COVID-19 crisis like for you as you thought about leading the congregations you pastor through such an unprecedented time?

Janet Prat (JP): The first Monday and Tuesday were completely exhausting. Of course, it started with the weekend. I was to graduate from Methodist Theological School in Ohio on Saturday, March 14 after five-and-a-half years of class, but since campus was shut down my diploma will come in the mail. So I had a lot of emotion to start the week.

But then I just jumped full steam ahead into trying to figure out what to do for everybody. So, again, Monday and Tuesday [March 16 and 17] were completely exhausting. I just felt like I was going twenty-four hours, nonstop. By Wednesday things were a little better. Thursday was fairly normal. Every Thursday the churches provide a meal at The Manor, a three-story apartment complex for the elderly in Stoneboro. We did that as before, but this time we dropped the meals off rather than staying for dinner.

CC: How are you staying in touch with folks in the various congregations?

JP: I’ve instructed my secretary to call everyone in all five churches just to make sure everyone is ok. I have been on Facebook and email almost nonstop with parishioners. I’ve sent out a couple dozen cards to some of the older folks who don’t have internet. We just want to let them know that we are here and we care.

CC: I know finances are tight at many rural churches during normal times. How do you think the financial aspect of this crisis will impact the churches in your charge?

JP: The smallest church of the five was starting to get into a financial struggle before this happened. Now the treasurer is getting very concerned.

CC. So the solvency of the church could be at stake?

JP: For the smallest of my churches, yes. But it’s a fine line. We’re in this crisis and pandemic, so the last thing I want to do is say “Hey, we need your money,” so I need to figure out how to address that.

We did just launch our e-giving, so that was great timing in a way for our younger families, but for that one church and its aging congregation, I don’t know if we will have anyone who will use e-giving.

CC: Are doing things to cut costs and trim the budget in light of this?

JP: I’ve actually told my secretary not to come in for a couple weeks. Coincidentally, my associate pastor, who worked half-time for the church, is in seminary and had been finding that she was not able to maintain half-time hours, so we just moved her to quarter time as of this morning. The move was already in process, but we expedited it due to the situation. I really could use another full-time pastor. I would like to hire somebody full time, but I can’t even address that right now. So that just puts more on my shoulders.

CC: How are you caring for the elderly in your church and in your food ministry at the HUD housing community?

JP: I haven’t gotten a lot of feedback from my older folks. The ones I have heard from aren’t worried about it. Many are saying, “We’re not concerned about it. We have lived our lives.” It’s more my young families who are concerned. They are hunkering down and protecting their kids.

Even at the senior HUD housing unit where we do a weekly dinner church, half of them still wanted to get together. Normally, we get fifty people together there, so I couldn’t do that. We decided to deliver the meal to the lobby, and they picked up the meal. We are also delivering meals to some of the elderly folks in our church who can’t get out. We have also offered delivery service for groceries, but nobody has taken us up on that.

CC: How have you been transitioning to online platforms? If so, what has this experience been like for you and your churches?

JP: We were already online. The Stoneboro church is the only one of the five churches with internet, and I live stream there every Sunday morning. We usually only live-stream my message, but this week I am going to put on an entire worship service, complete with music, because I play the piano and sing. We also stream children's church on our Facebook page right after my sermon.

Other than that, I am on email and Facebook all the time, just to keep people encouraged and to let them know what’s going on. We are using our prayer chain for folks who don’t use computers to keep them updated if there is a change. Each week folks in each of the five churches mail printed copies of my sermon to those without internet access.

CC: So you have been live-streaming for a while now. Is that because it was a useful way to connect with all five churches?

JP: We started it a about a year and a half ago, when I had a tech-savvy secretary who recommended it. Now 200 to 400 people all over the east coast watch it every Sunday.

CC: With this experience, have you found that you’ve been able to help other pastors make the jump to streaming their services?

JP: I don’t know. We just use Facebook Live because it is easy. I think that is the easy way for people to do it if they have internet access at their churches. That’s one of the hardest things. For instance, I can’t get internet at my Lakeview church. That’s an issue, and an issue that many churches can’t overcome. I don’t think there are very many churches in our ministerium that actually have the ability to live-stream from their churches right now.

CC: In general, have you found ministers within the United Methodist Church or your local ministerium to be connecting to help each other and the community?

JP: Ministers in our ministerium in the Lakeview School District area have really connected during this time to make sure that our communities are taken care of. We’ve divided the area up into the areas of our churches, so that churches are helping folks who live nearby.

I also talked to our school superintendent about feeding the children of the school. They have developed a feeding program through the school and area using three locations. One of those locations is a church in the ministerium.

We wanted to check back in on Pastor Pratt and the churches of the Methodists United in Faith charge after a couple weeks of online-only worship. Here’s what we found when we did.

JP: Live streaming is going great and continually exceeds my expectations.  In a usual week we have 200 to 300 hundred views of the message on Facebook.  This past Sunday we had 799 views, 521 engagements, and 1,247 were counted as reached.  We also did Children's church live on Facebook for the first time and it had 471 views.  I am also hearing from people who are sharing it. This week I heard from one of the church's neighbors that she shared it with a friend in Michigan who grew up in Jackson Center.

Our children's church live-feed is being well viewed, and we are now streaming these messages twice a week. Additionally, our associate minister does a reading of a Psalm each week that is also well viewed.

We are still dropping off meals for Seniors.  It brings great smiles, some normalcy, and something to look forward too.  Instead of meeting together, we prepare a week of lessons and activities for them to do on their own. We try to make it fun. They look forward to opening the envelope each day to see what the activity is for that day.

Janet Pratt is a member of the Project on Rural Ministry's Agricultural Cohort. She serves as senior pastor of Methodists United in Faith, a five-church charge in Mercer County consisting of Lakeview UMC, Stoneboro UMC, Hendersonville UMC, Vincent UMC, and Mt. Hope UMC.  She recently completed her post graduate studies at Methodist Theological School of Ohio and has a passion to "Make Jesus Known" to everyone in the communities she serves.  She and her husband (Mike) have two children (Hannah and Daniel) who are both pastors serving churches in the Harrisburg area.