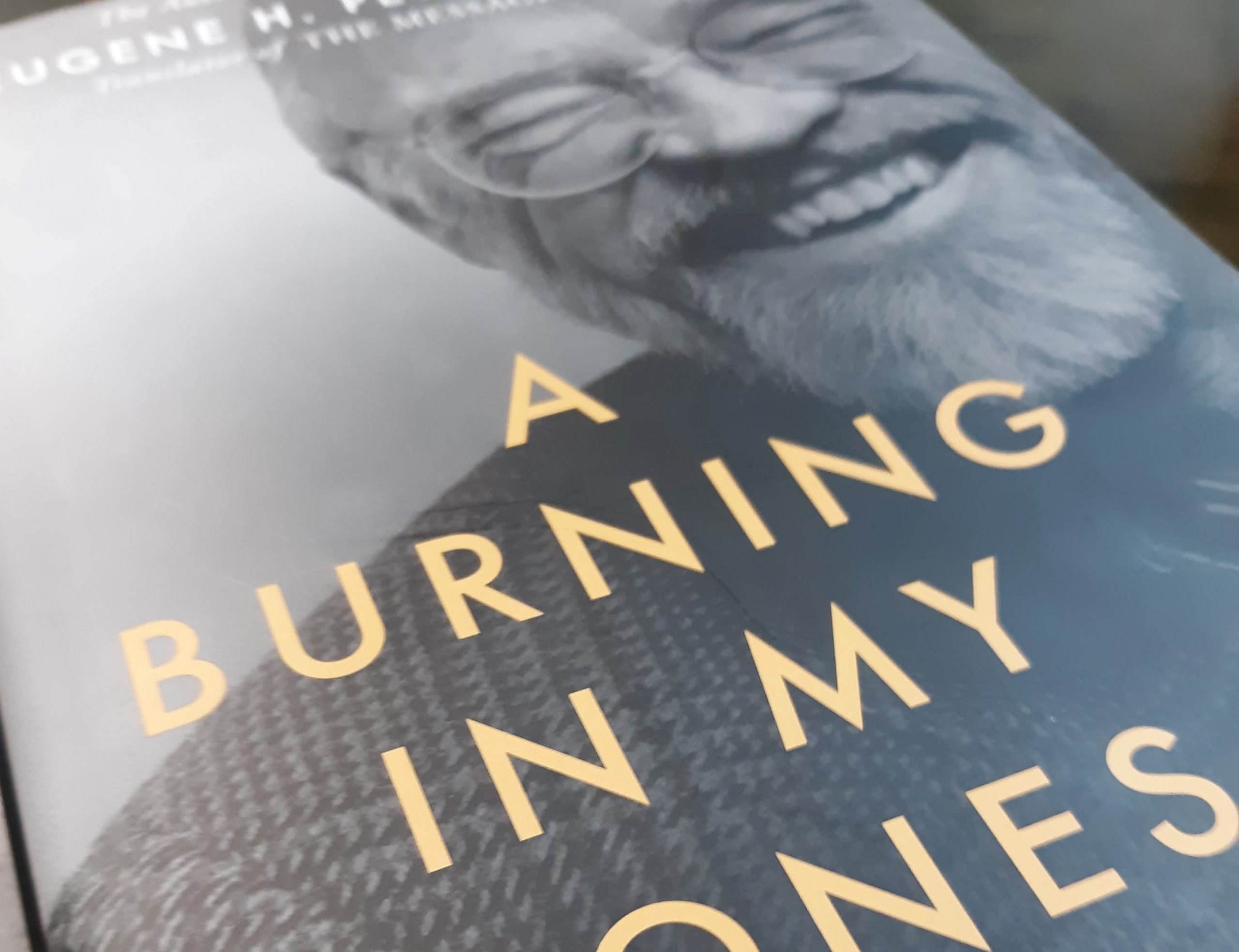 Place, Posture, Pastor: A Review of A Burning in My Bones, the Authorized Biography of Eugene Peterson

What does the average pastor have in common with an pastoral celebrity who sold over twenty-eight million copies of his books and rubbed shoulders with the likes of Bono? As a new biography shows, if the famous pastor’s name happens to be Eugene Peterson, the answer to this question may be quite a lot.

The Art of Biography

If there was ever a work that disproved the idea that a book can’t be judged by its cover, Winn Collier’s recent biography of Peterson may be it. From first glance, the reader comes face to printed-face with Peterson, whose warm smile exudes kindness and seems to invite the reader to turn the page and dive into the life, mind, and spirit that animates it.

And it’s not just the cover photo that fits the book’s subject. The choice of biographer is hardly haphazard. This is an authorized biography, and Peterson’s choice of Collier serves as another commentary on the Peterson’s sense of the importance of story, embodied presence, and a certain way of living into the pastoral calling.

Collier, himself a writer with two-and-a-half decades of pastoral experience, comes to this project as one who understands the interplay between Peterson’s bi-vocational ministry (pastoring/writing), and has wrestled with more than a few of the same realities of platform creation and editorial rejection letters that Peterson found himself forced to navigate, especially in his early years as a pastor seeking to craft words into something others would find meaningful. In Collier’s hands, the life of a pastor/writer is told with fitting attention to the beauty and rhythm of words, well placed, on paper.

Collier is, admittedly, a sympathetic biographer. Collier’s affection for Peterson is real, and this biography is both a work of art and a work of heart. He has spent hours in Peterson’s Montana cabin with Peterson, Jan and their family listening to old stories and paging through photo albums. As a young pastor, Collier had connected with Peterson, and Peterson had been there to listen (and, characteristically, not give much in the way of advice!) to Collier as he navigated the uncertainties and trials of pastoring a local congregation.

Notably, Collier navigates the bonds of friendship and the bounds of biography well, never allowing himself to overlook Peterson’s clay feet when they show themselves under the clerical robes. Whether one-too-many glasses of bourbon or one-too-few evenings a home with his young children, the pastor we meet in these pages is both inspiring and yet human—perhaps more familiar than we would care to admit.

In Collier’s telling, Peterson’s humanity mixes with his pursuit of pastoral faithfulness and geographical rootedness to present the reader with access to the life and mind of someone who, in spite of the millions of copies his books sold, remains refreshingly approachable and unflinchingly pastoral.

While it’s impossible to sum up a book (or a life!) in a few hundred words, it is worth highlighting a few key takeaways especially suited for pastors.

The Power of Place

Peterson’s story is one that reminds us again and again that place matters, that pastors discern and explore their callings not only in seminary desks but on sidewalks, in living rooms, and the myriad places in which the pastoral vocation is honed and worked out in everyday life. There's a physicality to it that keeps us and our pastoral work both literally and figuratively grounded.

For Peterson, it was the rugged landscape of Montana that first shaped his life. The son of a workaholic small-town butcher and a mother who preached fiery Pentecostal sermons (with her sons in tow) to loggers and anyone else she could gather, Peterson’s formative years were defined by the rhythms of small-town life and the expanses of mountain climbs. He came to know the goodness of work, of community, of nature, of solitude, of God during this season. It was a place that made a lasting impression on his life and ministry, a place he and his family returned to for annual retreats. It was a place to which he would one day return to write and to host friends old and new.

While Montana provides the bookends to Peterson’s story, it was the subdivisions of Bel Air, Maryland, not the mountains of Montana, that provided the context for Peterson’s pastoral work. From the formation of Christ Our King Presbyterian Church in 1962, to the time Peterson stepped into teaching and writing fulltime in 1991, he wrestled with the implications of pursuing “a long obedience in the same direction” in a place he described for years as “The Badlands.”

Like many of us who are called to ministry, Peterson was faced with decisions during these years about whether to stay put or to leave in search of greener pastoral pastures. In the early years, Peterson stayed at Christ Our King because other doors closed. In the second and third decades, he stayed because he sensed a call to a people and a place—even if it wasn’t the place he would have chosen for himself. In the end, he stayed for nearly three decades—a fact that in retrospect seemed “pure mercy.”  During these years, through God’s mercy, “Christ Our King was becoming a church” and Peterson “was becoming a pastor” (153).

Another way in which Collier’s telling of Peterson’s story may prove helpful—both to pastors and to those called to other vocations—comes in the form of the metaphor of a dog trailing a scent. The image, taken from Denise Levertov’s poem “Overland to the Islands,” presents a “picture of a dog following its nose without any clear direction.” For Peterson, this was the story of his life, a life that, as Collier notes, seemed “more like tracing a scent than following a map” (60).

The image is fitting. Peterson had not set out with a ten- or twenty-year plan or a vision statement. All his life, he had attempted to follow where Christ would lead. As he followed the scent of God’s call, from a PhD program, to a church plant, to writing, to his translation of the entire Bible (The Message), the trail was often winding, seemingly haphazard. Much of it, Peterson himself could not have predicted. Yet God used the journey with all its sharp turns and circling back in ways that helped call a generation of pastors to engage Scripture afresh and to eschew the trappings of pastoral ambition and the shallow careerism that often accompanied it.

As much as the metaphor carried obvious import for pastors, the idea of following God with the abandoned eagerness of a dog on the scent, is an image that could be applied to all Christians, regardless of their vocation. As I’ve thought about it, I’ve found it to be a metaphor that can breathe new life into the church’s longstanding emphasis on the Missio Dei, the reality that the work of God's people is not rooted in us as pastors or even in the Church, but in the initiative and ongoing work of the sending God. In an era when the Missio Dei and the related concept of the missional church are no longer new, a metaphor like this can breathe fresh life into an essential theological concept.

Finally, it is worth noting the theme of humility that runs through Peterson’s life. This is not to say that Peterson was perfectly humble. As Collier highlights, Peterson wrestled with his own ambition and pride somewhat regularly in his journals. However, Peterson’s humility—especially in light of his prolific writing and eventual, somewhat stumbled-upon, celebrity status—is noteworthy.

After reading this book, I find myself wondering if Peterson’s ability to navigate the shoals of both pastoral work and trans-local ministry without losing his head was rooted in his ability to hold fast for so long to a place and its people while simultaneously maintaining a posture toward God that was akin to a dog on the scent. Both emphases served as reminders of the inherent limits of pastors (and all human beings) as embodied creatures with finite amounts of energy and wisdom.

Peterson understood embodied ministry, and it helped him embody the pastoral life for thousands. Rather than reaching for the sky, Peterson’s life and ministry offers an example of the wisdom of reaching for God in the everyday places we find ourselves.

Here's one more thing I'll offer as a kind of final thought, disclaimer, and tribute to Peterson's legacy wrapped into one. Almost ten years ago my wife and our young family found ourselves in a new city looking for a church. We stumbled into a church plant where we met a pastor, who remains to this day my model for pastoral humility. Every so often our pastor would refer to “his pastor.” Our pastor was Winn Collier. Only later did we learn that “his pastor” was Eugene Peterson. The humility and pastoral wisdom of the mentor had been passed down, pastor to pastor, life to life.

Charlie Cotherman is program director of the Project on Rural Ministry at Grove City College. He is also a pastor at Oil City Vineyard, a church he and his wife Aimee had the privilege of planting in 2016. He has written on rural ministry, church planting, and history for a variety of publications including Christianity Today, Evangelicals, and Radix. He is the author of To Think Christianly: A History of L'Abri, Regent College, and the Christian Study Center Movement and a contributing editor of Sent to Flourish: Guide to Planting and Multiplying Churches. He lives with his wife, four children, and a spoiled cat in Oil City, Pennsylvania.