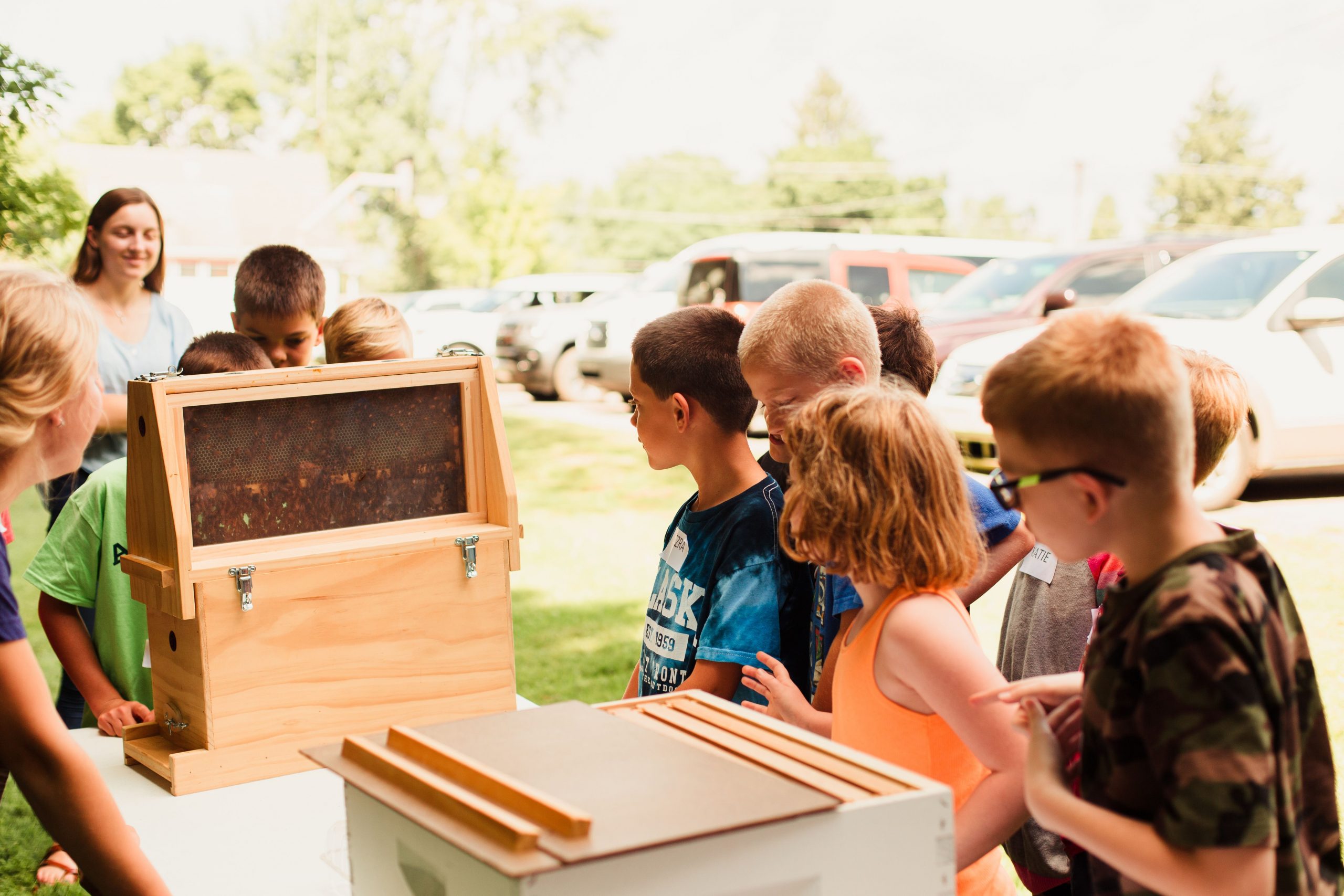 This summer, Project on Rural Ministry (PRM) partnered with the Bee Project at Grove City College in an effort to promote both biology and theology.

About The Bee Project at GCC

The beginning of the Bee Project traces back to 2017, when an FDA mandate got veterinarians involved in honeybee medicine to protect people from worsening antibiotic resistance because of bees being treated with antibiotics. Even though bees were kept as an agricultural animal, they had not been given veterinary attention in the same way as the larger animals like sheep or cows. This meant that when bees got sick, the beekeepers would just spray their bees with antibiotics. At the time of the mandate, the increased level of antibiotic resistance was becoming a major public health issue, so the increased focus on honeybee medicine was an attempt to find alternative ways of treating bees without overusing antibiotics.

When Grove City College professor Tracey Farone heard about the burgeoning field of honeybee medicine, it interested her greatly, both for its novelty and because it was addressing an important problem facing public health. She studied bees intensively during 2019, travelling to France and the western states to learn from experts as well as shadowing beekeepers in the Grove City area. With their help, the college developed a pollinator garden and set up four bee boxes, which have increased to ten boxes since then.

The bees have provided a diverse range of hands-on learning for students at the college, from engineering students equipping them with solar panels and physics majors observing their thermal communication to art students painting their boxes and entrepreneurs designing labels for their honey. And, of course, biology students, who Dr. Farone said have been enriched by getting “a hands-on opportunity to understand the biology of the bees and the plants.”

Bees and the Bible

Along this journey, Dr. Farone has tracked down over sixty references to bees and honey in the Bible, as well as passages that show the value of community for the Christian walk. For Dr. Farone, the interactions of bees in the hive offer a sort of model of this type of interconnected community. “Bees and the hive represent community and the body of Christ and how we should all work together,” she said. She notes that passages like Romans 12 say that “we, though many, are one body in Christ, and individually members one of another.”

Dr. Farone also pointed out that honey is used as a symbol of God’s provision, saying, “its sweetness is a demonstration of God’s love.” This can be seen in how the promised land was described as “flowing with milk and honey.” The sweetness of honey is also used as a metaphor for the goodness of God’s word, such as when Psalm 119:103 says, “How sweet are your words to my taste, sweeter than honey to my mouth!” Dr. Farone’s studies of the intersection of faith and bees is widespread, ranging from how they are a model of biblical stewardship to how the nastier bee-like insects such as wasps and hornets are used as warnings about God’s judgement. Her studies have developed into a five-session chapel study she plans to share at the college this fall, as well as an evening talk that she was able to share at Rose Point Reformed Presbyterian church one Wednesday evening this July. “There’s a lot of Biology and science, but then also the theology,” she said.

Putting the “Bee” in VBS

Through PRM, the Bee Project was able to partner with Rose Point Reformed Presbyterian Church for more than just Dr. Farone’s talk. With the help of summer interns Sydney Hanson and Ellie Persohn, they also were able to provide a children’s program during VBS and bring honey to widows and shut-ins from the church as well. Ellie called this experience “a great opportunity to join with a church and use them as our community and give there and serve there.”

Pastor Charles Brown described the observation hive that Sydney and Ellie brought in for the kids as “a highlight of the week.” He said that some kids were a little nervous when they heard that there would be bees at VBS, but since the observation hive kept the bees all contained the kids got to see them up close while also remaining safe. They also brought in some drone bees, which, being stingless, the kids were able to hold without fear of being stung. Handling bees like this was a new experience for them and reinforced what they were learning about the different kinds of bees and how they work together.

Exploring bee anatomy and learning about the different types of honeybees in one colony was one way that this program was able to show the kids firsthand the value of life and the wonder of God’s creation. “The fine detail helps us realize the complexity of life that we can see through creation and biology and ecology in honeybees,” Ellie said. Additionally, Sydney mentioned how “The bees allow a wonderful opportunity for the church to practice good stewardship.” She explained that this is important because bees are an indicator of the overall health of an ecosystem and can teach us to conserve the environment, while also working the land and enjoy its fruits, in this case, honey. “Bees are just a really fun way to combine sweetness (which everyone loves) and the idea of stewardship,” she said.

The next day the interns returned to share that sweetness in the tangible form of honey. They went with Pastor Brown to visit five of the widows from Rose Point, some of whom physically cannot get around anymore and all of whom live alone and were greatly encouraged by a visit, as well as by a jar of fresh honey collected from the Grove City bees. “All the widows we visited were happy to receive that gift,” Pastor Brown shared, going on to explain how uplifting it was for them to have a chance to talk and to bond over shared faith and common life experiences. “I, as a pastor, especially saw God using that time to encourage our widows,” he said.

“They were with us just over the two days, Wednesday and Thursday, but they did a lot for us in those two days,” Pastor Brown said. The PRM outreach through the Bee Project “was brand new this year and we were the first church they were able to do this program at,” he said, “but I would encourage other churches to do this and I think it is a worthwhile ministry for the college to have.”

Emily is a PRM writing intern also partnering with First Presbyterian Church of Jeannette to gain firsthand experience in ministry. She is a lifelong resident of southwestern Pennsylvania.