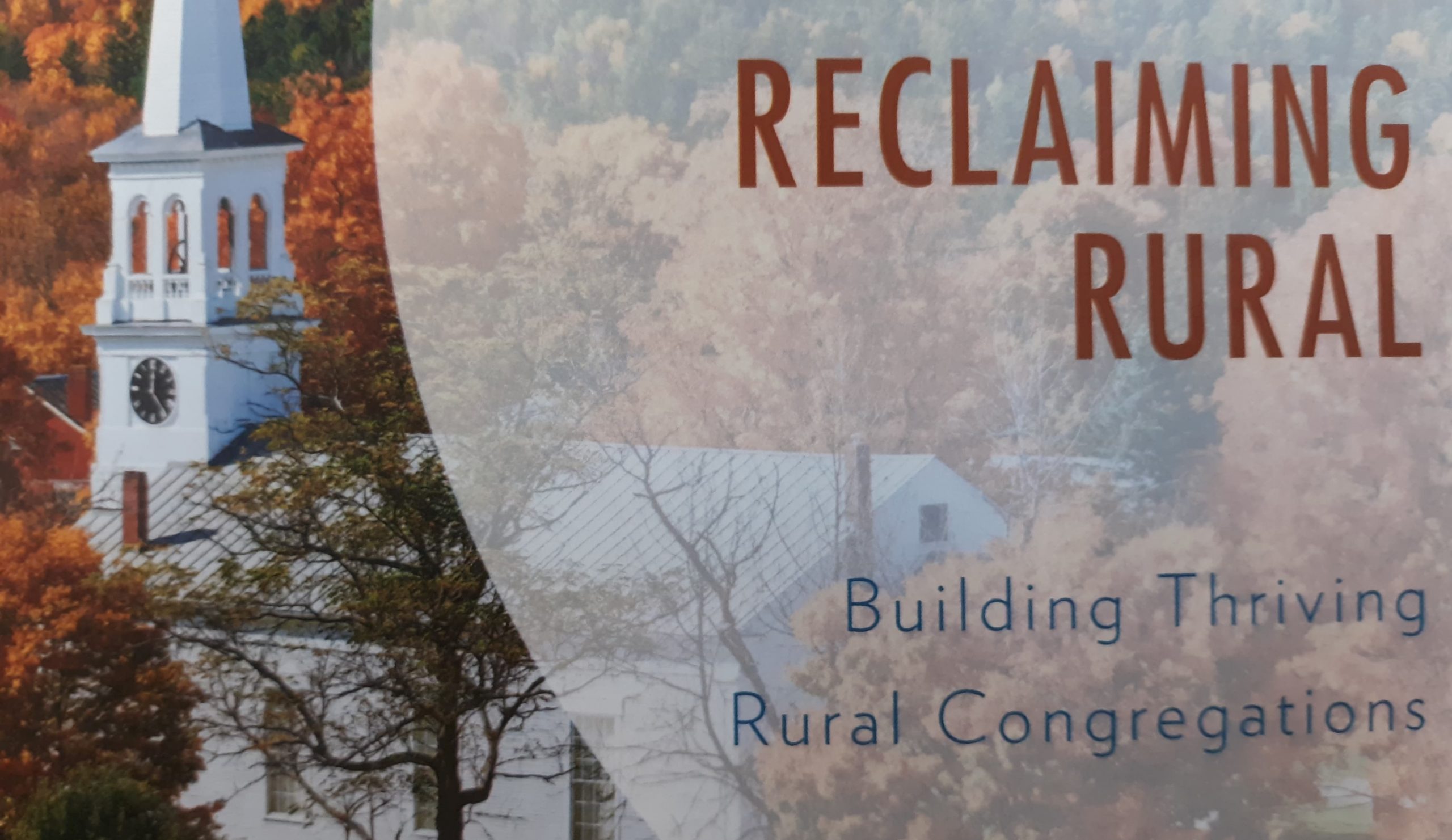 As interest in rural ministry has grown over the last few years, so has a corresponding literature--books written by and for rural and small-town pastors.

For those of us who tried to look up books on rural ministry ten or fifteen years ago, the increase in contemporary and accessible literature on rural ministry is both welcome and noteworthy. Gone are the days when a rural pastor felt like the specific needs of his or her small rural congregation did not register on the publisher’s list of concerns. (They still may not rank very high on the list, but at least they are on it!) This shift is a significant development, and one that I have reflected on before, both here and here.

As the number of books addressing the specific context of rural ministry grows, so does the need to identify the most helpful and substantial volumes within the literature. Few pastors, and certainly not most rural pastors, who often balance everything from sermon preparation and pastoral care to building maintenance and administration, have an excess of time for reading and study. If a pastor can’t read everything on rural ministry, where should one start?

From the book’s first chapter, Stanton makes a compelling case for appreciating the diversity and complexity of rural places and the experiences of those who live in them. In fact, his leading question “What is the typical rural community?” is really a launching point for one of the key takeaways of his book—there is no “typical” rural community or rural church. Rural communities are not all hubs of goodness, grit, and strong work ethics, just as they are not all hopelessly shedding jobs and population. (In fact, as Stanton notes, some rural communities have added population and jobs so successfully that that they no longer meet the classification rural.)

Stanton’s deep conviction that the on-the-ground reality is far more complex than leading narratives of rural life typically admit, makes his book a running commentary on the need to “reclaim the narrative” of rural churches and the communities they serve. “Rural churches are misunderstood and maligned,” Stanton writes. “They, like their communities, adopted false narratives about themselves that prevent them from living into their full potential” (xi).

Like fellow small-town writer, academic, and pastor Stephen Witmer, who argued in his 2019 book A Big Gospel in Small Places (IVP) that small places are both “better” and “worse” than people think, Stanton’s initial chapter cuts against both the agrarian idealism he sees in the ways urban folks have appropriated Wendell Berry’s writings as a window to a supposedly authentic rurality as well as the narratives of rural decay and escapism showcased by J.D. Vance’s bestselling Hillbilly Elegy (2016). It’s not that these narratives don’t contain aspects of truth. They do. But they also sell rural areas short.

Why He Hates Wendell Berry

At first glance, Stanton’s distaste for Wendell Berry may take some readers by surprise—especially if a reader happens to dig a bit and find that portions of the chapter first appeared in the provocatively titled essay “Why I Hate Wendell Berry.”

For Stanton, these strong feelings toward the impact of Berry’s work stem from his sense that Berry’s books foster a romantic, agrarian idealism that makes rural spaces seem inherently virtuous, thereby allowing people like Stanton’s urban colleagues “to disengage from rural spaces” and buy into the belief that “rural churches and communities have nothing to teach except as a nostalgic model” (9). When treated this way, “rural communities become places of fantasy” where reality and imagination cannot be easily separated (9).

More than Pessimism and Decay

On the other hand, a view that over emphasizes rural decay breeds a kind of elitism that works to “otherize” rural communities and undermine their hopes. As Stanton notes, most of the time this elitism comes in subtle suggestions that successful people leave rural areas.

In one of the most memorable anecdotes from the book, Stanton describes an experience that alerted him to the need to hide the parts of his story that revealed his rural roots. As a newly matriculated freshman at Wake Forest University, Stanton was eating lunch with some of his peers, when one mentioned that she wanted to apply to Teach for America after graduation. Unaware of the nature of the program, which served students in struggling school districts, Stanton mentioned that most of his favorite high school teachers had been Teach for America teachers. This revelation elicited a quick response. “My classmate exploded. ‘I went to one of the most prestigious prep schools in America,’ she told me. ‘You went to a poor, rural high school in the middle of nowhere. It makes me made that people like you get to come here’” (11).

So how can pastors and the communities they serve avoid the extremes of idealism or pessimism while identifying and building thriving congregations and communities?

For Stanton, any effort to “reclaim vitality” starts with rooting vitality not in generalized standards like the United Methodist Church’s 2010 Towser-Watson Report, that was geared to identifying vitality based on metrics that primarily made sense for large urban and suburban congregations. Instead, Stanton argues, congregations need to look closer to home, paying attention to their “immediate assets,” things like their ability to connect a cross section of the community on a weekly basis and their identities as trusted stakeholders in their communities (33). Stanton argues that rural congregations can thrive when they steward these assets with a clear theological vision and a commitment to their community.

Putting the Rural Church in Its Place

Whether describing evangelism as community development, countering generalized narratives about rural ministry, or calling for the practice of preaching as a form of “local theology,” Stanton calls rural churches to root themselves deeply in their local context—to know their place, and to stay there with kingdom intentionality.

The story of a congregation, like the story of a community, is local, historical, and unique. There may be some general trends, but the beauty of ministry in rural areas—or, one might argue, ministry anywhere—is to pay attention to the ways in which God has woven local communities together and continues to work in them today.

Some might be prone to see the missional impulse in this latter suggestion. Stanton, following his own advice that “theology needs to be the foundational point from which we build our community development efforts,” roots this attentiveness, not in the Missio Dei but in his own theological tradition. As a United Methodist pastor, Stanton finds his theological touchstone in the Wesleyan doctrine of prevenient grace, which reminds us that that God’s grace is “at work in our community” before we even start (54).

A Call to Action and A Call to Place

Taken as a whole, Reclaiming Rural offers a compelling call for understanding rural churches as essential, yet endlessly varied and diverse, parts of healthy rural communities. As a book that calls for deep engagement in the places we call home—be it our local communities or our theological traditions—Reclaiming Rural is a welcome addition to the growing literature on rural ministry and a call to greater attentiveness right where we are.

Charlie Cotherman is program director of the Project on Rural Ministry at Grove City College. He is also a pastor at Oil City Vineyard, a church he and his wife Aimee had the privilege of planting in 2016. He has written on rural ministry, church planting, and history for a variety of publications including Christianity Today, Evangelicals, and Radix. He is the author of To Think Christianly: A History of L'Abri, Regent College, and the Christian Study Center Movement and a contributing editor of Sent to Flourish: Guide to Planting and Multiplying Churches. He lives with his wife, four children, and a spoiled cat in Oil City, Pennsylvania.